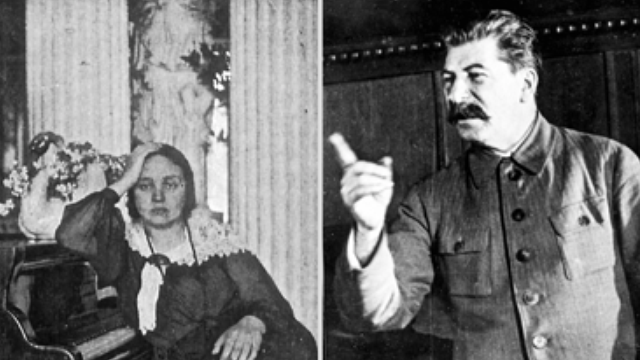 If you uttered a word against the Soviet leader, there was little chance you’d ever say anything again. But Stalin’s favourite pianist was spared the fate of thousands of others.

One evening in 1944, Stalin was listening to the radio when he heard Yudina playing Mozart’s Piano Concerto No. 23. The leader liked it so much that he immediately demanded a copy of the performance.

Unfortunately for the radio station, it had been a live broadcast and there was no recording. But no one dared tell that to Joseph Stalin.

In the middle of the night, Yudina was woken up and quickly driven to a studio where a conductor and a small orchestra had hastily been gathered to record the requested concerto.

The conductor was so terrified that he kept messing up. They changed him for another, but he couldn’t handle the tension either and was sent away. So a third conductor had to be found. But Yudina remained serenely calm.

Finally, by daybreak, the concerto was recorded and a single copy of it was pressed and delivered to Stalin. Mercifully for all concerned he was unable to tell the difference from the broadcast he’d heard.

Soon afterwards, Yudina was surprised to receive a letter containing 20,000 rubles, sent at the order of Stalin.

The fearless pianist later acknowledged the gift by letter. “I thank you for your aid,” she wrote. "I will pray for you day and night and ask the Lord to forgive your great sins before the people and the country. The Lord is merciful and He’ll forgive you. I gave the money to the church that I attend.”

Stalin reportedly read the letter as his inner circle – who had already prepared her arrest warrant – awaited the give-away twitch of the eyebrow which could mean only one thing. But remarkably Stalin put the letter aside and said nothing.

Nine years later, as the leader lay on his deathbed, it’s reported that Yudina’s recording of the Mozart concerto was playing on a record player nearby.

Maria Yudina, who dared to inform Joseph Stalin that God would forgive his great sins, outlived the leader by 17 years, dying in 1970. Her grave in Moscow has been a place of pilgrimage ever since. Tru, da Stalin would have easily offed her.

the yudina look like she’d only get stronger in the gulag.

Tru, da pimp was like “muzic herself is silent when da tzar speaks” n stopped playing

Da tzar wuz like “damn, if we cut off anotha head today, dats gonna add in to da blade sharpening expenditures, plus we spent a fortune fo da banquet coming up… sheeyat, if we kill diz random famous mofo dat got chick hair n taps dat box to make noise come out, Russia will juz look bad to foreign investors n sheeyat. Ok, but I’m not offering him a free trip to ma brothel with exotic chicks locked up in da basement like I planned”

“The death of Stalin”

I liked that movie!