I have it in mind to make an album of my own impro-compos and full impros sometime next year: I have to write out some lockdown impros first. I don’t really fancy hiring a super mega hall and 88 so I was toying with the venue where I did my last perf, just interested wut you mofoz think of the audio quality here. Recording from da rectal but I’ve already edited it to take out all the false notes I can (don’t ask, it’s quite tricky sometimes when you only have one take to work from

) and done a lot of general audio clean up, basically it’s a feasibility study test rec…

My initial feeling is that the 88 isn’t 100% in tune, eg the treble G#s around 1.08, but that’s an issue which can be solved in advance. Or I’d already tractormilfed da 88 into detuning with da previous

I’m not sure how well it will works, but I got a pitch gizmo in my later version of RX that tunes the pitches to 440 using some weird algorithm.

Could give it a shot after work if you send a file link.

Ty, but I’m not too bothered about pitch sheeyatz atm, I’m fairly sure I can tweak stuff like that in Melodyne if I absolutely need to, plus you can change pitch in the izotope I’ve got in any case (never used it tbh, only the tempo shift in emergencies if I want to reshape a phrase). It’s kinda the tuner’s responsibility to get it right pre rec and I suspect tbh that this 88, having been used for a few events in the days immediately preceding my concert simply hadn’t been returned.

I remember trying it on a Ho rec and it sounded like shit cuz his piano had some sort of stretched tuning maybe across treble and bass.

Yes I believe that.

I remember now. The Ho’s scrib Third sonata. it actually snapped to the wrong note things were so weird. Record wobble probs also at play now that I think of it, but same diff.

Fascinating, I put a short section into melodyne and it said the g# I don’t trust is +4c… but all the other notes are between +3 and +5c, so I must be hearing some kind of timbral thing rather than tuning per se

Fwiw closeup vid, using the above audio with a touch of added reverb 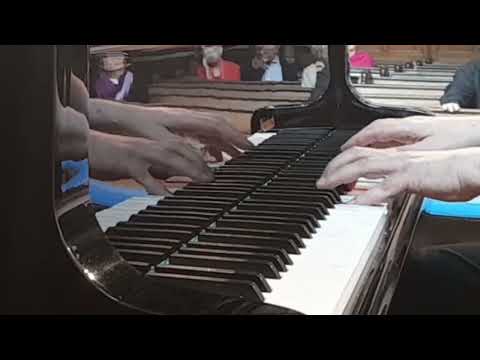