From Alicia de Larrocha to Rachmaninoff - Pianists come in all shapes and sizes.

Having met/seen pianists in person - who has surprised you the most by being either surprisingly taller or shorter than you expected?

Kissin was taller than I expected. If you remove his hair I think he was still a little taller than me. Maybe like 6’1/185cm? Not a pianist, but Yannick Nézet-Séguin was really small, but buff and wearing a really tight fitting suit.

Yeah I remember being surprised a little by Kissin, just assumed he was an average 5’9-5’10 mofo

He’s tallest along with Kozhukhin in the part where they all bow at the end.

Any idea how tall Pogo is? His hands look huge.

I’ve read that Pogo is about 6’2, but I’ve never met him. I’d be interested to know how tall Bolet was, he looks very tall seated at the piano.

Any idea how tall Pogo is? His hands look huge.

I know this is about living pianists but since we’ve been talking about Tiegerman – he looked tiny for a man. 5’2?

Godowsky looks an inch shorter than Charlie Chaplin who I looked up as being 5ft4.

Hofmann also only looked an inch or so taller.

What about Richter? Definitely looks like a big mofo, Serebryakov on the left a bit minute

Kissin was a bit of a surprise, tru, maybe an inch shorter than me at 6’2

Pires is tiny. I was walking with my head in a paper, waiting for her concert to start and almost knocked her over. 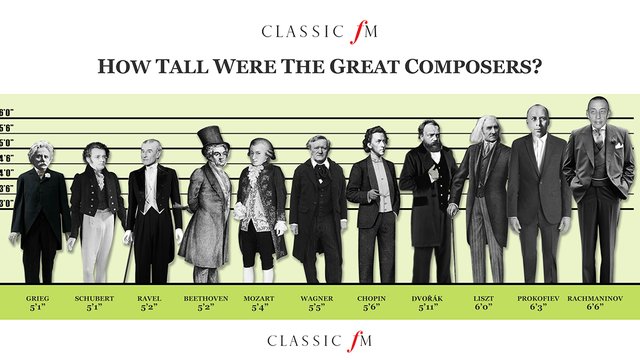 How tall were the great composers?

Mozart, Beethoven and of course Rachmaninov in full, towering glory.

I doubt Liszt was 6 foot, although he was described as tall. Rachmaninoff wasn’t any taller than 6’3 (191cm). I never realised Prokofiev was tall?

's height and it seems neither have many others claiming 6’6. Looks like they’re basing it on Stravinskys quote which finishes ‘he was an awesome man’. Surprsing praise from him.
https://www.rachmaninoff.org/forum/the-life-of-sergei-vasilyevich-rachmaninoff/svr-s-height-496

Has some interesting info.

Yeah, I think a lot of it is based on that quote.
However, his friend Chaliapin would’ve probably been 6’5 or 6’6. I read Liszt was 185 cm.
But you know, it also depends when they measured this…people shrink when they get older, some more than others.
At first I couldn’t believe that my father for example (he’s now 82 years old), when younger, was about as tall as me - when I met him last time he really was quite a few cm. shorter than me. However when I tried some of his old suits, they fitted me perfectly. :-o
Btw yes Prik was quite tall…and I didn’t know Grieg was such a shorty!

The statue of grieg at troldhaugen is supposedly to scale, and its short. A mate had a photo there.