“….the quality and general culture of audiences has diminished in equal measure……The average listener of today has hardly the faintest idea about what he is hearing. He neither knows anything about new music, nor can he differentiate between outstanding, moderately good and poor performances.”
Sir András Schiff 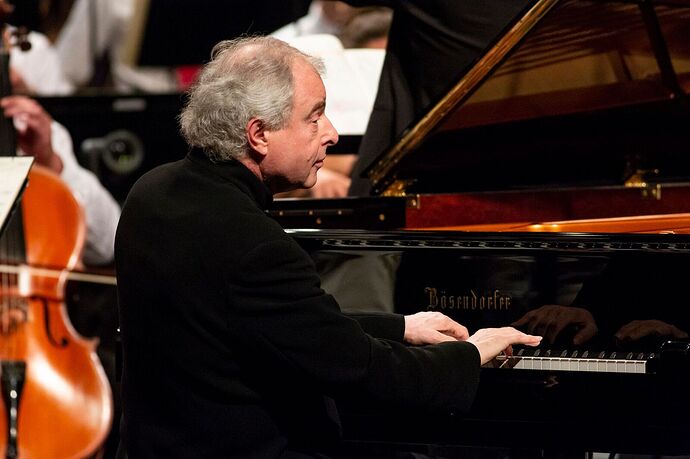 Why Pianist Sir András Schiff Is Unfair to Modern Audiences

We look at remarks András Schiff wrote in his memoir, and the audience's role.

Schiff’s statement is obviously true. However, I am not sure it’s that important. What’s important is whether the audience appreciates the music. If they do appreciate good music that’s what counts.

Schiff is mostly correct, but he’s also being an arsehole.

And were audiences of the 1830s really super musically literate? I have my doubts.

I think expressing such views is tbh deeply unhelpful. “yes more people should come to classical concerts” (I assume

) yet if you tell your prospective audience they are uncultured cunts with no taste that hardly encourages them. Sometimes it is enough to enjoy something even if you don’t fully understand it.

tiz nevah a gud zign when u haff to zay to yo payin audience:

“actually, let me tell u how zheeyat u iz”

After Schiff is done teaching Richter how to play Haydn, he can teach audiences about music.

Andras Schiff & Montreal Zymphony have a falling out News

Audiences being unable to distinguish quality a large part of schiff being able to program post classical era works.

The average listener of today has hardly the faintest idea about what he is hearing.

tiz nevah a gud zign when u haff to zay to yo payin audience:

“actually, let me tell u how zheeyat u iz”

I’m not sure about that. There’s more music schools and music students than ever. I Imagine the music enthusiasts of yesteryear were mostly uninformed dilettantes like me. Also, with YouTube and the distribution of music everywhere, listeners have been exposed to much more high-quality stuff than ever before Whereas in olden times you might have a few imported LPs and not the life’s work Of even obscure artists at your fingertips.

Yeah there is no excuse to listen to crappy stuff now

Surely if you don’t listen to crap, you don’t understand how good the greats are?

I’m suffering one of my periodic bouts of insomnia, and spent most of the dark hours of the morning watching Schiff vidz. I watched Bond and Shang-Chi earlier in the week and was disappointed by both.

Anyway. In his Goldberg lecture-recital, he takes a swipe at millions of Korean and Chinese children for playing da varz note-perfect but with no understanding, feeling, or style. He also takes a pot shot at da WANKAH a bit later on, n generally acts like your urbane uncle who likes to be provocative after a couple of sherries. Poss he’ll end up as da thinking man’s lebresheeyat?

Anyway. He said that the Goldbergs were intellectually and emotionally out of reach of children, but in the subsequent 90 minutes completely failed to identify or plumb any depths at all, restricting his comments to pointing out the canon intervals, rhythmic correspondences and other stuff that is evident with study, and obvious to children with guidance.

I mean, fuck, I do think that far too many people play da Goldbergs with no comprehension, but if you’re going to stand up in public and take a shit on specific ethnicities you really ought to be able to pinpoint exactly why they’re falling short in your opinion.

I dunno, this prob old news (vid was from 2017 after all) n I’m just addled from lack of sleep.

But hey - enjoy the hot alt chicks I posted in da other thread.

but if you’re going to stand up in public and take a shit on specific ethnicities you really ought to be able to pinpoint exactly why they’re falling short in your opinion.

Lmao the dude just feels bad that a random kid in China, Korea, Russia and Japan has more chops than him.

How did Brendull, Schitt, Goode and other similar mofos even “make it” in the first place?

Hmmm ok then. I listen to Feinberg and refuse to hear a note this pompous asshole plays

Jascha Heifetz himself said that even an uneducated class of young children could tell a great performance from a bad one. Or something along those lines.